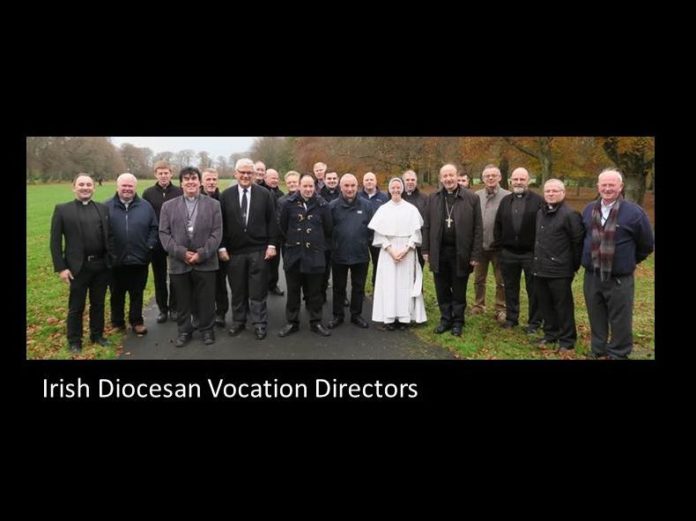 The following is an article by Fr. Willie Purcell, the National Vocations Director in Ireland.  The article has been published in the May 2020 edition of Intercom Magazine.

The Ongoing Task of Vocations Promotion in Ireland

Being a priest or religious in Ireland today is both challenging and adventurous. The reality is that there are fewer priests and religious engaged in active ministry than in the past and our Catholic population is changing – the numbers of priests and religious in our country is declining, in our congregations the average age is increasing, our parishes are more diverse, and, with the influence of our secular world, regular church practice is declining. And yet, whatever about stable identity and ministry of priests and religious, the burden of what is expected from them – from both within and outside the Church community – seems to increase as the years go by.

But there is a reality that never fails to encourage me. In the midst of all this change, God is still calling people to priesthood, permanent diaconate and religious life. Most priests and religious today would say they are happy and joyful to give their lives in service of Christ and his people. Whatever the daily demands and pressures, the expectations and worries a priest and religious might experience, it remains an immense privilege to bring the healing presence of Christ to the lives of the sick, the sinner, the lost, the poor, the homeless and the marginalised; there is a powerful drive to build up the Kingdom of God in our communities, our parishes, our families, and in the hearts of individuals.

vocation is always about giving oneself, in love and compassion, in the name of Christ, for the good of others.

It is a deep and unspeakable joy –and a responsibility before which every priest and religious trembles – to feel that one is acting in the name of Jesus Christ, preaching his word, celebrating his life, and sharing his love and his sacrifice with the people we are called to serve. No one is a priest or religious for himself or herself alone: vocation is always about giving oneself, in love and compassion, in the name of Christ, for the good of others.  Ireland needs an honest and open conversation about priesthood and religious life. We need to be openly supportive of our priests and religious and encouraging of those who are searching to find their vocation in life.

In the past, the work of diocesan and religious vocations directors has focused on preparing resources for the promotion of vocations to the priesthood and religious life. In recent years the profile of those discerning a vocation has changed significantly and is much more varied than before. While twenty years ago the candidate discerning a vocation was likely to have been just finishing secondary school, today there is no such thing as an ‘obvious candidate.’ Some still come from secondary school, having heard the Lord’s call in their family, school, parish, youth group, ecclesial movement, or as a member of a pilgrimage group. Others enquire because they are searching for a more fulfilling way to live their lives in a world that desperately needs generosity of life and heroic commitment.

Many have been to university, or have finished apprenticeships, or have worked in a variety of different occupations. Yet none of these experiences have le them with the satisfaction that they thought they would have found. They all want to make a difference with their lives and they feel that God may be calling them to consider serving him and his people as a priest, sister or brother. A survey done recently by the National Vocations office for diocesan priesthood showed that many of those who considered a vocation and followed through on it speak of a seed that was planted, sometimes as early as primary school. Many in formation will say that they found their way, thanks to the personal invitation of a priest or religious, even if that invitation was given ten, twenty or more years ago.

There is a challenge here for all of us to consider new ways in which the priesthood and religious life is presented and encouraged. We are given many statistic and analyses, and much research that there is a crisis in vocations to the priesthood and religious life in Ireland. But I am not convinced that anyone ever became a priest or religious because they were convinced by statistics.

As diocesan priests, religious sisters, brothers, parents, teachers and parish communities, we are called to be models of cooperation through our lives as members of a community. Through our involvement in many different ministries, we give witness to living in the spirit of cooperation that is necessary in every Christian community. With the guidance of the Holy Spirit and our unity in prayer, vocations to the priesthood, diaconate and religious life will indeed flourish.