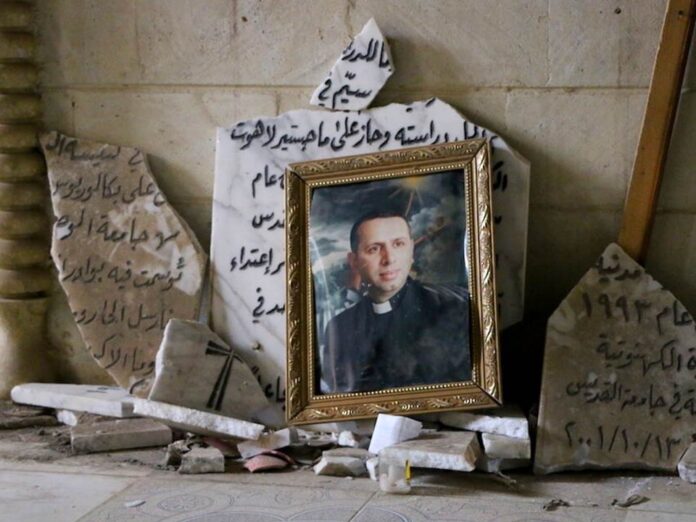 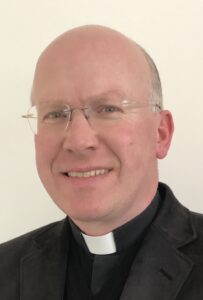 Fr Billy Swan, Vocations Director for the Diocese of Ferns shares his memories of Fr Ragheed Ganni, a Chaldean priest from iraq, who was martyred in 2007. Fr Swan lived with Fr Ganni when Fr. Ganni studied in Rome. Fr Swan served for four years as the Director of Seminary Formation at the Pontifical Irish College, Rome. He is currently based at St Aidan’s Cathedral, Enniscorthy, Co. Wexford.

Fr. Ragheed is recognised as a servant of god, with his cause being opened by the congregation for the causes of saints.

I lived with Fr Ragheed Ganni at the Irish College in Rome from 2002 to 2003. He was one of three postgraduate priests from Iraq who were living at the College and who were studying in Rome at the time. Ragheed’s room was on our corridor and he mixed happily with us Irish priests and others from different nationalities. There were many qualities to admire about him. He was very popular, respected and mixed well with everyone. He used to amaze Irish pilgrims who visited the College when he would greet them with some words of Irish that he learned from working at Lough Derg during the summer months. He played football, table tennis and took a full part in the life of the College. Like his colleagues from Iraq and other troubled parts of the world, I admired the clarity of his identity as a Christian and as a priest. He was clear in what he stood for and clear about the price to pay for living the Gospel in a hostile environment.

In March 2003, the war on terror that began as a response to the attacks of 9/11, reached Iraq with the invasion of the Allied troops. I still have vivid memories of Ragheed in the College TV room as he watched the events unfold on Sky News. The worry etched on his face was there for all his friends to see. We supported him as best we could but feared for his future. Undoubtedly, he feared for himself and his people but was determined to return to his diocese of Mosul and to be with his people at their time of need. Having completed his studies, we bid him farewell on the steps of the College in June 2003 as he left to return home. On arriving in Mosul, he was appointed as parish priest, but shortly after, dark clouds began to gather. He was warned several times by extremists to shut down his parish and send the people away, but he refused. He said: ‘As long as the people still come, then how can I send them away? I belong here with them’.

In May 2005, Fr Ragheed was invited to speak at a Eucharistic Congress in Bari in the South-East of Italy to share his experience of living as a Christian under persecution. On that occasion, he shared two profoundly inspiring insights that will always stay with me. Concerning the Eucharist and what it meant for the Christians of Iraq, Ragheed said: ‘Mosul Christians are not theologians; some are even illiterate. And yet inside of us for many generations one truth has become embedded: without the Sunday Eucharist we cannot live. For us, the terrorists take life, but the Eucharist gives it back’. He spoke these words as one of hundreds of people who took their life into their own hands by gathering for Eucharist each Sunday. He also shared on that occasion:

‘There are days when I feel frail and full of fear. But when, holding the Eucharist, I say ‘Behold the Lamb of God. Behold He who takes away the sin of the world’. Then I feel His strength in me. When I hold the Host in my hands, it is really He who is holding me and all of us’.

The last time I saw him was in November 2006 when he returned to Rome for the last time. On a Saturday morning, I helped him write a letter to President McAleese asking her to highlight the cause of his suffering people under threat of their lives. On our way out for a coffee break, I notice he was limping. I asked him what was wrong and he said: ‘My legs hurt. In Iraq I can’t leave the house except for Mass because it’s too dangerous. Therefore, I can’t exercise’. He then told me about what life was like for him and the Christians of his parish. I was humbled by how much he was suffering to be faithful to Christ and how light was my cross in comparison. I was embarrassed at how much we take our religious freedom for granted in the west when so many of our fellow Christians all over the world are deprived of it.

On 3rd June 2007, Fr. Ragheed Ganni was murdered along with three sub-deacons having celebrated Sunday Eucharist on the feast of the Most Holy Trinity. Having spoke so movingly in Bari in 2005 about the importance of the Eucharist in his life, it was a source of consolation to us that his blood was poured out for his faith having ministered at the altar an hour before, where Christ the priest poured out his blood and gave his body out of love for us all.

The Chaldean Church mourned the death of their beloved son. The Irish College community mourned our beloved brother as did many other Irish people who knew Ragheed. We were all distraught on hearing about his death. But also, because suddenly, Christian persecution had become real in a way that woke us out of our complacency.

After the death of Ragheed, we realised that praying to the martyrs is one thing. Knowing a martyr is another. For us blessed to know Ragheed, his life and death is a link to a chain of thousands of martyrs from Ireland to Iraq and all around the world. Christianity has been firmly established in Iraq for nearly two thousand years, but from the fourth century to the present day, Christians in countries like Iraq have faced periods of terrible persecution. Ragheed Ganni’s life and death connects the Irish Church to the suffering Church of Iraq and the Middle-East. 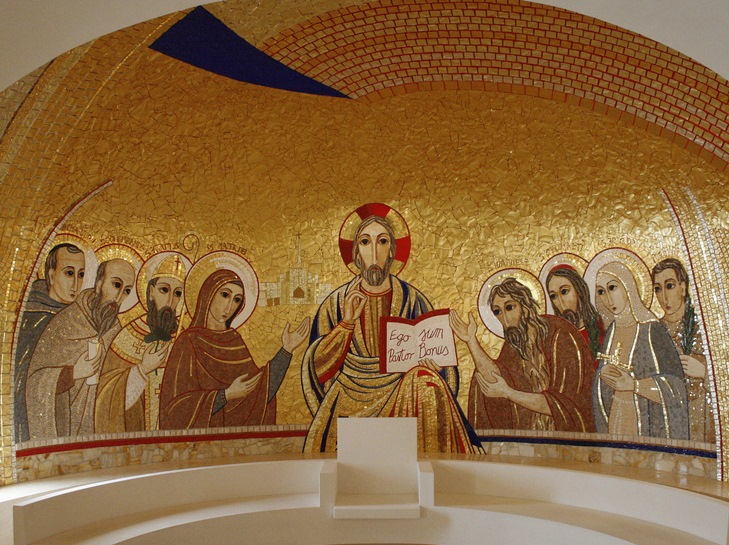 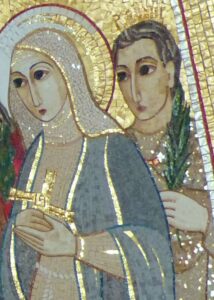 This deep spiritual connection is visualized in the mosaic in the apse of the chapel in the Irish College in Rome. There Fr Ragheed is pictured carrying a palm branch in the company of Saints Patrick, Brigid, Columbanus, Don Columba Marmion and Oliver Plunkett.  I recall giving a tour of the Irish College Chapel to a group of pilgrims who were visiting from Ireland. At the end of the talk, a young man asked me why the other saints had halos around their heads but Fr Ragheed did not. I responded by making a prediction that one day Fr Ragheed will have a halo around him in that mosaic for he will be declared saint and martyr of the Church. In 2018, near the eleventh anniversary of the deaths of Fr. Ragheed and his companions, it was announced that their cause had already been opened at the Congregation for the Causes of Saints. Our dear friend is now known as ‘Fr Ragheed Ganni – Servant of God’. It will be a source of great joy when, in the future, God willing, Ragheed will be beatified and canonized a saint of the Church. 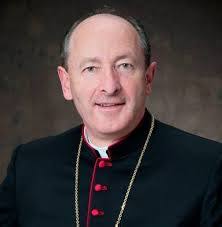 During his homily during a TV Mass for Vocations Sunday 2020, Bishop Phonsie Cullinan of the diocese of Waterford and Lismore spoke about Fr Ragheed’s legacy to those who knew him: ‘Ragheed is a hero for me, an example, an inspiration. We all need heroes. He in turn was inspired by Jesus Christ, the Good Shepherd. Ragheed knew Jesus. Jesus knew him. Jesus asked him to live his vocation of priesthood in a particular way’.

Ragheed Ganni is indeed a hero for all priests but also for all Christians. His teaches us to treasure our religious liberty and to protect it. But his story also urges us never to forget those deprived of that freedom. He pushes us to be clear about what being a Christian means and the commitment needed to be remain as a disciple of Jesus Christ through good times and bad. He brings us back to the Eucharist as the beating heart of our faith and the source of strength to so many whose only crime is their faith in the Lord. His memorable words of ‘He holding me’ is a powerful testimony of our communion with Christ when we receive the Eucharist, the intimate fusion of his divinity with our humanity and the boundless love that enables us to face any trial or difficulty.

Ragheed Ganni taught me of what it means to belong to the universal church. Before I knew him, the martyrs were historical figures of the past. With Ragheed’s death, their witness became a living stream of inspiration to fidelity to Christ

Finally, Ragheed Ganni taught me of what it means to belong to the universal church. Before I knew him, the martyrs were historical figures of the past. With Ragheed’s death, their witness became a living stream of inspiration to fidelity to Christ and the mission that he has entrusted to us in the modern world. Ragheed was one of thousands who suffered enormously for their faith and continue to do so. These are our brothers and sisters in Christ who held on to their faith and the truth of the Gospel while inspiring us to hold firm to ours. May the Lord who held him at the Eucharist and in life, hold him now for all eternity in paradise. Fr Ragheed, Servant of God, pray for us.