In October 2018 Catholic Bishops from around the world will meet in Rome to take part in a Synod of Bishops meeting in the Vatican.  The theme of the Synod is: Young People, the Faith and Vocational Discernment.  It is the fifteenth Ordinary General Assembley of the Synod of Bishops.   The purpose is to focus on how the church helps, guides and accompanies young people as they grow in faith and discern the part they can play in shaping the future of the Church.

Ahead of the Synod, a preliminary outline document called a Lineamenta is prepared and distributed to all concerned for comment. Based on the responses to this, a working document -the Instrumentum Laboris – is released globally and acts as the basis for discussions at the Synod.

When gathered in Rome, the assembly examines the proposals, or propositiones, put forward by members and passes those that receive approval to Pope Francis. The Pope uses these as a guide for a post-synodal apostolic exhortation – a papal document often written following a synodal gathering of bishops.

In January 2017, Pope Francis released a letter to young people at the time the Vatican released a Preparatory Document for the 2018 Bishops’ Synod on “Young People, the Faith and Vocational Discernment.”

In it he said he wanted young people to be “the centre of attention, because you are in my heart” and quoted the Rule of St Benedict to illustrate the importance of consulting young people before making important decisions:

“St Benedict urged the abbots to consult even the young before any important decision, because ‘the Lord often reveals to the younger what is best.’ (Rule of St. Benedict, III, 3).”

He also made it clear that the Church and her Bishops wanted to hear from young people:

“The Church wishes to listen to your voice, your sensitivities and your faith; even your doubts and your criticism. Make your voice heard, let it resonate in communities and let it be heard by your shepherds of souls.”

In March the Vatican released a 7,000 word “final document” of a pre-synod meeting held in March, a prelude to the synod called by Pope Francis. The document describes itself as “a statement reflecting the specific realities, personalities, beliefs, and experiences of the young people of the world.” 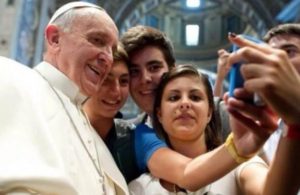 The March meeting was attended by 300 youth from around the world and included those “from various religious and cultural backgrounds.” For the purposes of the synod, “youth” are 16-to-29-year olds.  There are three main themes.

Are you being called?

Holy Hour for Vocations to the Priesthood in Dublin

© Irish Catholic Bishop's Conference - Web design by GetOnline Pro
We use cookies to ensure that we give you the best experience on our website. If you continue to use this site we will assume that you are happy with it.Ok